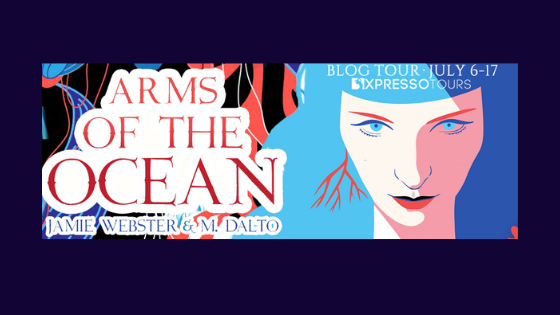 Nineteen-year-old Tristaine lived a life of bitterness. When her mother abandoned her family, and her father began drinking, Tris discovered the only thing that truly brought her happiness: the sea.

It called to her like a lover and flowed through her like a life force. When her only peace is threatened to be taken away, Tris realizes there is nothing she wouldn’t do to remain with the ocean.

Even if it means taking her own life to do so.

But the sea isn’t done with her -not yet- and Tris soon finds herself submerged in a world where love, betrayal, and honor stand stronger than any other force of nature.

Disclaimer: I received this book in exchange for an honest review as part of the Xpresso blog tour for its release.

TW: Mentions of abuse and suicide.

I’m not going to lie, the cover of this book is what really drew me in. When I read the blurb – and saw the cover – I had a pretty good idea which way this fairy tale would go, and I was not disappointed!

I’m a sucker for all things fae, and when I realized this would be a story about selkies, I got super excited! Of all the fae types, they’re ones that haven’t quite broken through into the genre just yet, and it was a breath of fresh air to see this story explore that particular race of fae. The story follows Tristaine, who happens to be the child of a selkie. She inherits her mother’s skin, and that grants her access to the selkie’s underwater kingdom.

Tristaine is a resilient heroine, though I wish she didn’t have to go through so much. Her life is an awful series of events in which she’s basically surrounded by abuse. To be honest, the degree of the abuse she suffers made me a uncomfortable. I don’t consider myself particularly sensitive, but even I had to put the book down more than once because a lot of what she suffers – and how she views herself in the wake of her suffering – sometimes became too much. Honestly, it seemed enough to me that her father was an abusive alcoholic and that she was driven to attempt suicide.

I don’t want to give to much of the book away, but be warned that the abuse gets worse. I will say this for the writers – the topics covered in the book and Tristaine’s story are handled with care and sensitivity. Those that love her in the book treat her the way she should be. I’m just not partial to a heroine whose entire arc comes from a background of abuse. And for that, I docked one star.

Otherwise, the writing was great and I wish we’d spent more time with other fae types. We get some brief glimpses of the larger fae culture, and what other races might be like, but every time I thought the plot might take a turn toward the larger world, it didn’t. The book leaves a few threads unexplored, and it feels like they’re set up for more in the future. I’m hoping there’s a sequel down the line that explores the problems Tristaine and Imriel must face against other fae.

The relationship between them really is the heart of the book, too. Imriel is every bit the prince someone like Tristaine would wish for, and seeing their relationship flourish and the way he treats her were my favorite parts of the book.

The writers have a knack for getting us to care about the characters, too, and not just Tristaine. It’s easy to dive into each of these characters’ backgrounds and get invested in Imriel’s struggle to do what’s right for his people, Loch’s fierce loyalty to those he cares about, and even Ember’s entitlement to what she thinks is her destiny. Every character feels fleshed out and real – a difficult task to accomplish when the story is mostly told from one point of view.

All in all, it was an entertaining read. Unfortunately, I couldn’t help but compare it to similar works by Holly Black, so I was missing some of the heavier world-building and exploration into fae life from those types of stories. That, combined with how heavy-handed Tristaine’s suffering felt at times, kept this from being a 5-star book for me. Still, though, if you like a different type of fae story, and enjoy mythos that don’t usually come up in mainstream fairy tales, check out Arms of the Ocean!

You can purchase the book at the links below: