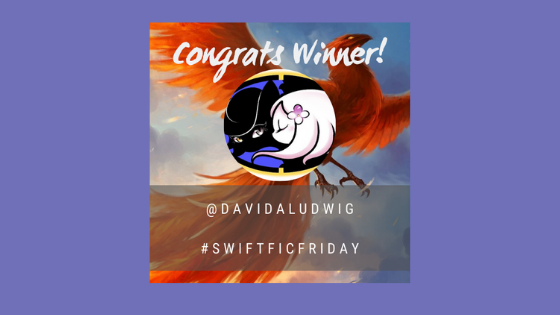 David A Ludwig (@DavidALudwig) flew the highest this week and takes his twelfth win!

Check out his story below and congratulate him on Twitter.

Congrats on your #SwiftFicFriday win @DavidALudwig! Check out his flash piece and show him some love #WritingCommunity

It was obvious which seat had belonged to Toni Tyler’s father. The head of the table was for the Powered Response Unit representatives and all the other seats were taken. She took her father’s seat with deep breathing and a perfect poker face. The Powered pair present did not represent PRU’s best or brightest.

Daring Duke was a spiritual Powered from a seedy city. He’d scurry home as soon as the PRUDENT meeting ended. Did that used car lot owner think his false facial hair concealed his civilian identity?

Three Ring was a physical Powered whose acrobat motif reminded Toni more of a clown. She wanted to ask if he had made any progress tracking down her father’s killer. Because she knew he hadn’t. That’s why she’d resolved to handle it herself. Off the books.

A tired voice shocked everyone to their feet.

“Milady,” Daring Duke bowed with a flourish of his top hat. “I had no idea you would be in attendance!”

Toni swallowed and reminded herself to breathe. Three Ring vacated the head of the table for Jian, a physical Powered founding member of PRU and the greatest superhero in history. Her reserved presence gave the meeting greater gravitas.

World crises were fairly mundane this week. The Defensive Emergency Neutralization Team could handle most of them without Powered help.

Jian volunteered to be airdropped into the worst disaster zone as well as handle the supervillain Daring Duke wasn’t sure he could get to with activity in his personal rogues gallery. Jian, of course, remained point on exposing and defeating the deadly Nightmare Syndicate. Afterward, Toni overheard Three Ring talking to the legend.

“Are you still letting that homeless guy crash at your apartment?”

One thought on “#SwiftFicFriday – Week 106 Winner!”