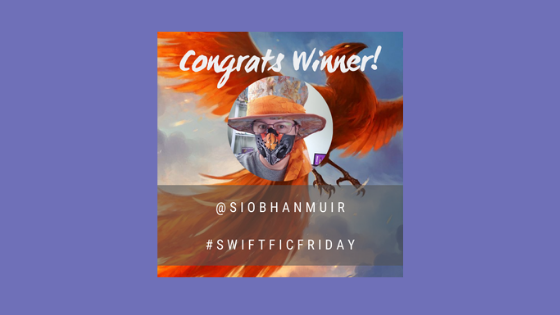 Siobhan Muir (@SiobhanMuir) flew the highest this week and takes her fifteenth win!

Check out her story below and congratulate her on Twitter.

Congrats on your #SwiftFicFriday win @SiobhanMuir! Check out her flash piece and show her some love #WritingCommunity

“Motherfucker!” The terrorist staggered backwards with his hands over his face.

Not today, asshole. Hermione reversed the rifle and flipped it over to squeeze a few shots into his knees. He screamed as he went down and she followed it up with another blow to his nose. He crumpled and she stepped over him to get to the people in the tunnel.

“All right, everyone out. We don’t have much time. We’re not staying so head to the far end of the hallway into the next tunnel.” She held the door open to the researchers. “Hurry. Let’s go.”

She let them stream past her, but kept her eye on Dr. Miller. There was something off about the woman. Hermione felt it in her gut and she’d been saved too many times by it to ignore it. Dr. Martell met her gaze and flashed her a short smile in greeting as he and the pompous ass carried Tessa through the doors. For some reason, his acknowledgement warmed her heart and made her feel all gooey inside.

What the hell is wrong with me? She abhorred feeling soft and gooey on missions.

“Bentley.” She barked it more sharply than she meant to as the guard closed on her.

“Other than the electronic locks, is there any way to secure these doors and keep our pursuers from following us? Or at least slow them down?”

“How do you know someone’s following us?”

She shot a look at the people flowing down the hallway. “The two hicks I just took out said an inside man has infiltrated our group.”

He blanched white. “Which man is it?”

She shook her head as they entered Building Three. “No idea. But don’t discount the women. They make better spies than most men.”