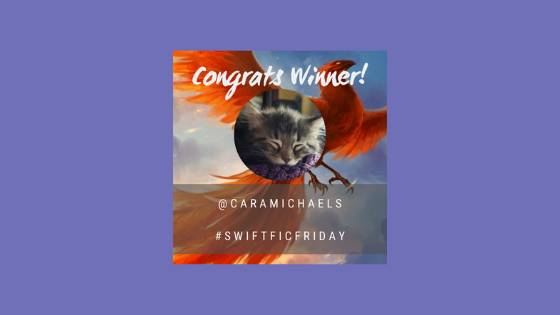 Cara Michaels (@caramichaels) flew the highest this week and takes her 14th win!

Check out her story below and congratulate her on Twitter.

Congrats on your #SwiftFicFriday win @caramichaels! Check out her flash piece and show her some love #writingcommunity

He wanted to laugh, because that entire concept rested on a lie built on thousand thread count Egyptian cotton. Red Egyptian cotton, because red hid the stains better. Red distracted. Implied something other than exhaustion and pain held him beneath the silky sheet, pinned him under the soft blanket over that.

There were days—too many days—when he wished for an event. An accident, maybe. He wasn’t particular. Either of them could die, so long as one of them died.

He wouldn’t mind making that sacrifice.

Some days he thought anything might be better than this, lying in a big, beautiful bed and wishing for anything—an alien invasion, a meteor strike, a permanent out-of-body experience—to give him a way out.

Had he really believed in the power of a stuffed animal once?

He wished it was here now.

He ached everywhere, ears twitching as the apartment settled into its day with a creak here and a sigh there, proof of life beyond the walls passing along in the hallway with a shout or laugh. The drum of footsteps. A voice singing. Sometimes in a hurry, sometimes with all the time in the world.

And still, he laid in bed.

He wondered if anything was broken this time. For certain, there were bruises. Maybe a few more spots that didn’t quite blend into the very expensive sheets. Sin was, after all, difficult to disguise.

John knew the bruises would be especially hard to hide today. No effort had been made to place them discreetly. He would have to explain.

He would have to lie.