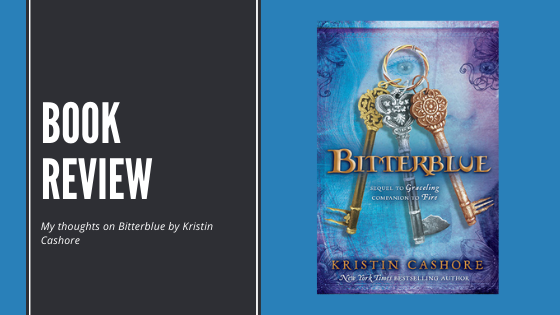 Eight years have passed since the young Princess Bitterblue, and her country, were saved from the vicious King Leck. Now Bitterblue is the queen of Monsea, and her land is at peace.

But the influence of her father, a violent psychopath with mind-altering abilities, lives on. Her advisers, who have run the country on her behalf since Leck’s death, believe in a forward-thinking plan: to pardon all of those who committed terrible acts during Leck’s reign; and to forget every dark event that ever happened. Monsea’s past has become shrouded in mystery, and it’s only when Bitterblue begins sneaking out of her castle – curious, disguised and alone – to walk the streets of her own city, that she begins to realise the truth. Her kingdom has been under the thirty-five-year long spell of a madman, and now their only chance to move forward is to revisit the past.

Whatever that past holds.

Two thieves, who have sworn only to steal what has already been stolen, change her life forever. They hold a key to the truth of Leck’s reign. And one of them, who possesses an unidentified Grace, may also hold a key to her heart . . .

Reading this one has been a long time coming!

I read Graceling back in 2016 and I’ve been itching to get my hands on this one for a while. I really liked Graceling, though this kind of fantasy story isn’t my usual read. It says a lot about Cashore’s story telling abilities that – though I’ve made it my mission to avoid book series as a whole – I was willing to pick another one in the Graceling Realm. It’s funny, the person who recommended Graceling in the first place did so because she knew I wanted a standalone story. I think that’s what drew me to this series in the first place. There was no *need* to pick up Bitterblue (and I might pick up Fire someday), and yet here I am.

Though Bitterblue is very connected to the events of Graceling, it’s also it’s own story. Cashore has a talent for character-drive stories, and that’s evident in the diversity of her cast and the way she artfully crafts the story around them. Bitterblue follows the title character, a queen who’s inherited a kingdom from her demented and evil father. Though her father has been dead almost a decade by the time the story starts, he’s very much a presence in the story, and I think that was my favorite part. Cashore makes hiss presence and influence such a major part of Bitterblue’s life, and it’s easy to relate to her as she struggles to find her stride as queen, and discovers that she’s capable of more than her advisors let her do.

The Graceling Realm series as a whole paints a beautiful, intricate world, full of political intrigue and drama, sprinkled with action that you don’t see coming. The setting alone is almost a character in its own right. Bitterblue’s city is as alive as she is, and as much a major player in the story. Cashore’s descriptions of the setting and the way she takes the reader through her world leaves you feeling like you’ve really been there. Long after you close the book, you’re thinking about more than just the story and the characters, but even the places, and I found myself wanting to go back (and wanting to pick up Fire next.)

I could ramble about this series forever, so I’ll stop here. If you like fantasy, you definitely need to pick up Bitterblue (or any of the Graceling Realm books).