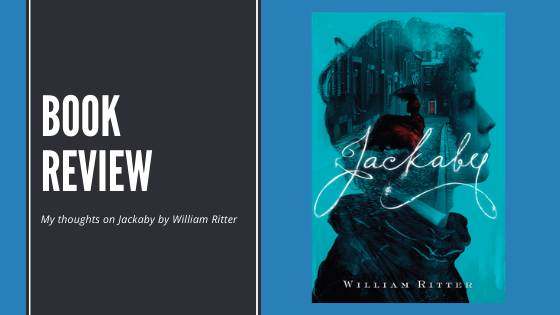 “Miss Rook, I am not an occultist,” Jackaby said. “I have a gift that allows me to see truth where others see the illusion–and there are many illusions. All the world’s a stage, as they say, and I seem to have the only seat in the house with a view behind the curtain.”

Newly arrived in New Fiddleham, New England, 1892, and in need of a job, Abigail Rook meets R. F. Jackaby, an investigator of the unexplained with a keen eye for the extraordinary–including the ability to see supernatural beings. Abigail has a gift for noticing ordinary but important details, which makes her perfect for the position of Jackaby’s assistant. On her first day, Abigail finds herself in the midst of a thrilling case: A serial killer is on the loose. The police are convinced it’s an ordinary villain, but Jackaby is certain it’s a nonhuman creature, whose existence the police–with the exception of a handsome young detective named Charlie Cane–deny.

Doctor Who meets Sherlock in William Ritter’s debut novel, which features a detective of the paranormal as seen through the eyes of his adventurous and intelligent assistant in a tale brimming with cheeky humor and a dose of the macabre.

This was another one of those books I picked up on a whim. To be honest I can’t believe I’ve never heard of it before seeing it at the bookstore. It takes the best of Buffy the Vampire Slayer, Doctor Who, Supernatural, and Sherlock Holmes to create a wonderful world of intrigue, comedy, and the supernatural. As a sucker for anything supernatural or along the lines of Sherlock, I latched onto this for dear life!

Jackaby follows Abigail, the Watson of the story, as she lands in the United States after running away from home in search of adventure. An independent woman if there ever was one, she’s always dreamed of doing more – even had to convince her father to convince her mother to let her go to university. When she decides instead that she wants to accompany her father on an archaeological dig, she tries to convince him again, only to be told to focus on her studies and finding a husband. In an act of full-on rebellion she steals the money they’ve given her and goes on her own adventure, which eventually brings her to her encounter with the titular character, Jackaby. Having spent nearly all her money, she tries to get a job and ends up as Jackaby’s assistant, going against the warnings of almost everyone she meets. She’s one of the best female characters I’ve read this year – she’s rebellious for her time period, but never in a Mary Sue kind of way. Abigail has made mistakes, but she’s grown from them. For the first time I can say, if this character were a real person, I’d love to be her friend. Getting to see the world through her eyes is the main reason why I’m looking forward to picking up the sequels.

Jackaby is as eccentric as any Sherlock iteration – with the exception that he actually ignores details he deems mundane (which is why he hires Abigail). His deductive reasoning comes from his ability to see fey and other magical beings. He’s probably my favorite re-imagining of Sherlock, as all the most recent versions of the classic character tend to be jerks and off-putting as people. On the contrary, Jackaby genuinely cares about the people around him, including Abigail, and everything he does, he does to help people – not for the challenge of the mystery. There’s a dark past to the character, too, a sense of tragedy that I hope gets explored in the rest of the series.

Abigail and Jackaby aren’t the only delights of the book – all the characters come alive, making it easy to envision the town and the events that carry the plot of the book. We’re never bogged down by drawn-out descriptions, but the author’s masterful use of brief descriptions makes it easy to lose yourself in the world of Jackaby. The supernatural is weaved seamlessly into the mundane, creating a story and setting that really makes you question whether the supernatural is just around the corner. Like I mentioned before, this is a series I’ll be getting through sooner rather than later!

Note: This is an old review, and I have since read all the books and this series is by far one of the best, if not the best, series I’ve ever read.