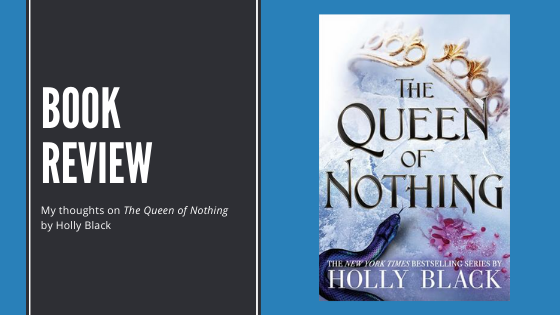 Title: The Queen of Nothing
Author: Holly Black

The finale to the New York Times bestselling Folk of Air trilogy, that started with The Cruel Prince and The Wicked King, from award-winning author Holly Black.

After being pronounced Queen of Faerie and then abruptly exiled by the Wicked King Cardan, Jude finds herself unmoored, the queen of nothing. She spends her time with Vivi and Oak, watches her fair share of reality television, and does the odd job or two, including trying to convince a cannibalistic faerie from hunting her own in the mortal world.

When her twin sister Taryn shows up asking of a favor, Jude jumps at the chance to return to the Faerie world, even if it means facing Cardan, who she loves despite his betrayal.

When a dark curse is unveiled, Jude must become the first mortal Queen of Faerie and uncover how to break the curse, or risk upsetting the balance of the whole Faerie world.

I’ve been waiting for this book since the second I finished The Wicked King , my all-time favorite Holly Black book. When the release date was pushed up, I literally jumped up and down. So, needless to say, by the time the book finally made it to my Kindle, expectations were sky-high.

The story picks up some time after Jude’s banishment, and she’s managed to adapt to life in the human world – by helping the local Folk. Honestly, I would have been happy if she spent half the book doing random tasks and assignments in a more urban setting. It reminded me of Tithe, the book that first introduced me to Holly Black over a decade ago. But things move fast in this book, and Jude finds herself in Faerie soon enough.

So I finished reading this one four days ago. I had to sit with my feelings on it a little bit. Originally I gave it five stars, because that was my knee-jerk reaction. I truly enjoyed this book and lost sleep to finish it. Everything that happened in it made sense and I was satisfied with how the series ended. But, after letting my initial feelings simmer, I decided to dock a star. Although I enjoyed this book, I didn’t enjoy it nearly as much as its predecessors. I was expecting something longer, and maybe with more of the political intrigue and plotting of the previous book. It left me wanting more, but not in the good way.

And though Jude and Cardan’s story comes to a satisfying end, there are many loose threads left throughout this book. I’d like to think that that’s just Holly Black setting up more stories to be told in this universe. And I’ll definitely welcome that!

It is by no means a let-down, but it also isn’t the most memorable of the trilogy. I was expecting to have a new favorite book by Holly Black at the end of this, but it’s not even in my top 3. In the end, this was an enjoyable, if too-short, read.