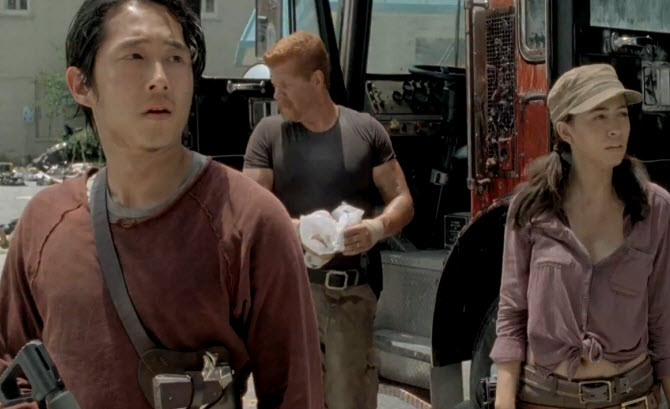 This is a twin post of the same recap on LegendZero.

So this week, The Walking Dead strayed from the main group and followed Abraham and his crew around, on the first leg of their trip to Washington. We get some insight into that group’s dynamic, as well as some much needed (though kind of confusing – the actor had to explain it during The Talking Dead) background on Abraham! Needless to say – SPOILERS AHEAD.

The episode starts off quite road-trippy, with everyone on the bus they fixed from the church, having good conversation as they make their way towards Washington. Everything seems to be going great, until something malfunctions with the bus, causing them to crash and end up with the bus on its side in the middle of the road. The crash attracts a bunch of walkers, and as they come to they’re forced to fight their way out of the bus. The engine is apparently on fire, so they have to get out as fast as they can. Quickly forming a plan to clear the walkers, they get out, taking each walker out quickly. Tara has to talk Eugene into being brave, as it appears that he’s too terrified to leave the bus. When he finally does leave with them, he seems almost frozen as he watches the others take down walker after walker, until one almost gets Tara and he finally pulls himself out of his stupor long enough to have her back.

Abraham, always thinking about the mission, is most worried about making sure Eugene is okay, as well as continuing to move forward. Eugene offers that they could turn around, seeing as they’re not that far from the church, but Abraham refuses, saying that retreat means failure. They continue on foot, determined to find another vehicle.

We cut to a flashback, where Abraham is bashing someone’s head in with a can of food. It doesn’t seem to be a walker, and when the camera pans out, it reveals that he’s killed quite a few people. He starts to call out a name – Ellen – and searches the grocery store for her, until he comes to a woman and two children. From context clues we can assume that he’s saved them, killed all those people to protect them, but they’re completely terrified of him.

Back in the present, the group has found shelter in what looks to be a bookstore. They arrange the shelves into a barricade, boil some water, and seem to settle down for the night. As Glenn and Abraham keep watch, Abraham thanks Glenn for sticking by them, despite the crash. They have a friendly enough conversation, until Glenn tells Abraham to get some rest – to which Abraham responds that he needs to get some ass first. Naturally, we cut to him and Rosita going at it, and it seems pretty normal, until Rosita tells him that Eugene is watching. Again. This is apparently a normal occurrence for the smaller group, giving us a bit more into their dynamic. It’s more than a bit creepy if you ask me, but they seem okay with it – they have some kind of understanding (he enjoys the female form – it’s a victimless crime). Tara stumbles upon Eugene the peeping tom, to thank him for saving her.

Eugene confesses that he caused the bus accident, having put glass in the fuel tank. He’s afraid that, if it wasn’t for the mission, they wouldn’t protect him. Tara tells him that they would protect him anyway, by virtue of being friends, and agrees to keep his secret as long as he doesn’t do it again. For a bit of levity, once Eugene leaves, even Tara takes a peek at Abraham and Rosita. When the scene cuts to Maggie and Glenn, we see a stark contrast with the Abraham-Rosita relationship. Maggie and Glenn are snuggled close, and Maggie talks about how she’s glad she’s with the group, though she feels some guilt for leaving Rick and the others (no mention of Beth – WTH Maggie?)

When we flashback again, it’s a continuation of Abraham’s backstory, and we get another glimpse at how scared his family is of him, even though he tells them they’re safe now.

In the present, Abraham, despite being injured and clearly needing rest, insists on continuing, while Rosita tries to talk him into taking a break. He refuses, even though the others also think it’s a good idea to relax for a day. What Abraham says goes, unfortunately, so they decide to use a firetruck they found and keep moving forward. The firetruck starts, and they’re able to advance a few feet before they realize that the truck’s insides are all clogged up by walker parts, and they’ll need to clear it before it can run successfully. As they’re about to clear it, walkers start to swarm out of the firehouse, and they’re forced into yet another slaughter, as they struggle to take them all down. Eugene manages to climb on top of the truck and use the hose to spray all the walkers into bits, soaking everyone in the process, too. Abraham refuses to let them dry off and find other clothes, instead dedicating himself to clearing out the firetruck before they move on.

Another flashback reveals that, the morning after Abraham killed all those people, his wife and kids ran away from him, leaving a note saying not to go looking for them. He panics and runs outside to find them.

When we’re back in the present, we see that the group has managed to make some progress in the firetruck, but they’re forced to stop in the road. As they work on fixing the truck again, a smell hits them, and they walk some distance to figure out what it is. Some ways down the road, they see that the source of the smell is a very large horde of walkers, one they clearly shouldn’t even attempt to drive through. Abraham wants to fix the truck and drive through it, but everyone else is adamant about find a way around it. The truck would end up breaking down, clogged by walker bits again, and they could get killed. Abraham goes a bit nuts, grabbing Eugene and dragging him back to the truck. Glenn tries to stop him, and there’s a bit of a physical altercation, before Eugene finally confesses – he’s not a scientist, he just “knows things” and happens to be intelligent. If you read the comics, you’ve been waiting for this moment as long as I have.

Eugene explains that. though he lied, he does still believe that DC is their safest bet for survival. He rationalized his lie away by saying that anyone that helped him get to DC would also find shelter there, and safety. He was doing them a favor. The guilt started getting to him though, the closer they got to their goal, because he didn’t know what he’d do when they got there, how he would confesses. Taking Tara’s advice, he was screwed either way – he simply picked the option that helped people out, so he confessed. Abraham yet again goes into a rage, beating Eugene to unconsciousness until Eugene falls over, hitting the cement – hard. He might be dead, he might not be, and Rosita actually stops Abraham from killing Eugene right there. Everyone scrambles to help Eugene while Abraham walks away, defeated as he falls to his knees.

In one last flashback, we see that Abraham stumbles upon the bodies of his family, apparently eaten by walkers. He puts a gun in his mouth, and the only thing that keeps him from pulling the trigger is Eugene running from some walkers and crying for help. After Abraham dispatches the walkers, he seems intent on going back to kill himself, but Eugene stops him, telling him that there’s a very important mission. Essentially, Eugene saved his life.

Conclusion: All the action made this episode go by pretty quick, but it was also a great episode, and a long time coming. I could have done without it at this point, though. Right now, I’m more interested in what’s happening with Beth, Carol, and Daryl. Anyway, The Walking Dead delivered yet another great episode, and now we want to see if Eugene(creepy as hell) is okay, if Abraham is going to snap, and what Maggie and Glenn are going to do now that Washington isn’t a mission. Hopefully Maggie will finally stop being the worst sister ever and actually care if Beth is okay – who knows?

What do you guys think? Sound off below!